I love reading everyone’s years in review, and I’ve been so excited to share my 2013 recap. This year has been epic in the true definition of the word.
In January I started the year off with the Disney Marathon. I hated it and immediately knew I wanted redemption on the distance, but I still did it and officially became a marathoner!

In February I ran the Best Damn Race 10k with friends as a 10k PR attempt. I was successful!

I trained hard through February and March for a Half Marathon PR, and though I earned a PR in March at the Florida Beach Half, it wasn’t a great race and I knew I head better in me.

In March, I bought a bike without any knowledge of what that would lead to!

And I went on my first ride. I went alone on the road without clipless pedals, I rode 22 miles, and I pretty much felt like I owned the world for that day. I was so proud of myself!

I then found out I had a stress fracture, which would derail my plans of running the Chicago Marathon or running at all for a few months. My butt spent a lot of those months sitting on the bike seat, and by the time I was able to run again I had already gotten up to 40 miles rides. I started pondering a Half Ironman (even though I hadn’t done a triathlon at all yet…).
I went to see my sister Kacey graduate from law school in May.

And in June Tim and I spent a long weekend in the Keys with good friends.

And then we celebrated our one year anniversary in Atlanta!

And I may have forced our trip a day short so I could come back to race my first sprint triathlon at Top Gun! It was a hard day.

I did two organized charity group rides and conquered (for the time being) my fear or riding on roads and with groups. I’m going to need to shake that out again after a couple of months off the bike, but looking at these pictures reminds me of that success. 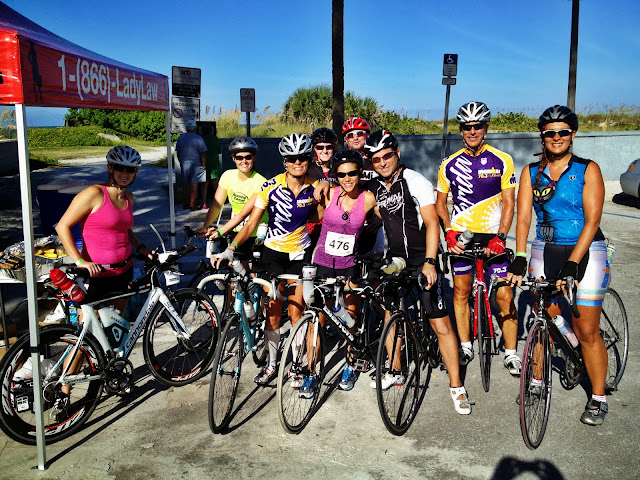 And then all the hard training I put in paid off as I completed my first 70.3 distance triathlon at Rev3 Florida! It was an amazing day in every way possible, and my 5:54:25 was minutes faster than I had  thought possible.

And to put the cherry on my already amazing year, I ran a nearly 16 minute PR on December 29th at the Jacksonville Bank Marathon! It was a crazy race, but I felt like I really wrapped my head around the distance more successfully.

Aside from the races, trips, and events in 2013, I felt like this year I realized I am truly happy.
I have an amazingly supportive husband and am in a marriage that is constantly growing and evolving. We’ve learned a lot over the course of the year, and I feel like we continue to get better at this marriage thing.
I have made new friends this year and developed strong friendships with them and friends I’ve had for more than this year alone. I can’t explain how much this has made Tampa feel like a home to me, since I came here five and a half years ago without knowing anyone.
I’ve realized, finally, that being an adult doesn’t mean giving up on having personal goals and striving for success. For a long time I thought that it all stopped when we finished school, so I went back to school and got my Masters degree. Now I’ve learned it’s just about continuing to dream big.
And with that, I’ll wish you a Happy New Year! I hope 2014 is a year of big dreams, good friends, and happiness for you.

This error message is only visible to WordPress admins